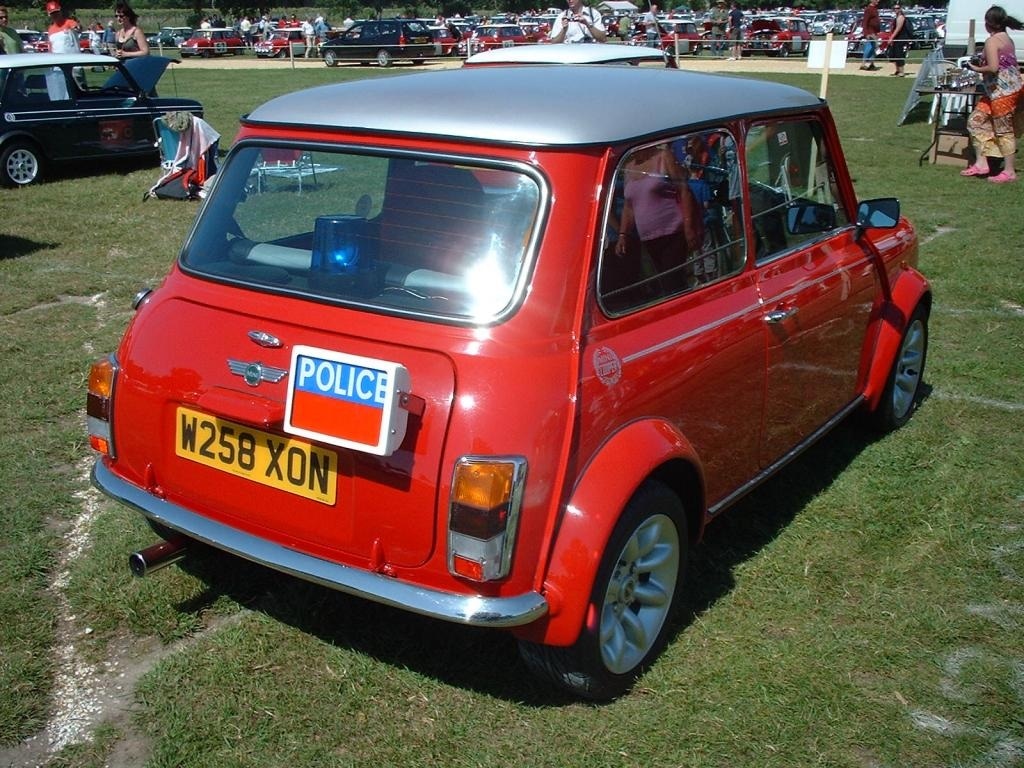 ​I first considered obtaining one of these cars during the summer of 2000 and liked the look of the 'Classic' Cooper. The twin spot lamps and skinnier 12” wheels suited me.  Nothing boy racer-ish, and with a red one I would paint the narrow arches body colour and the white roof back to its classic black.  So armed with this I went to my local Rover garage in Abingdon to see what they could do.  I told them:  Cash on delivery to my home; unregistered; preferably red but really, any colour would do; no finance; no trade in, in fact no nothing!  What’s the cost?  The sales girl looked through her book and gave me the list price.  So I told her my terms again and told her that I wanted a decent discount.  You’d have thought I wanted the world… 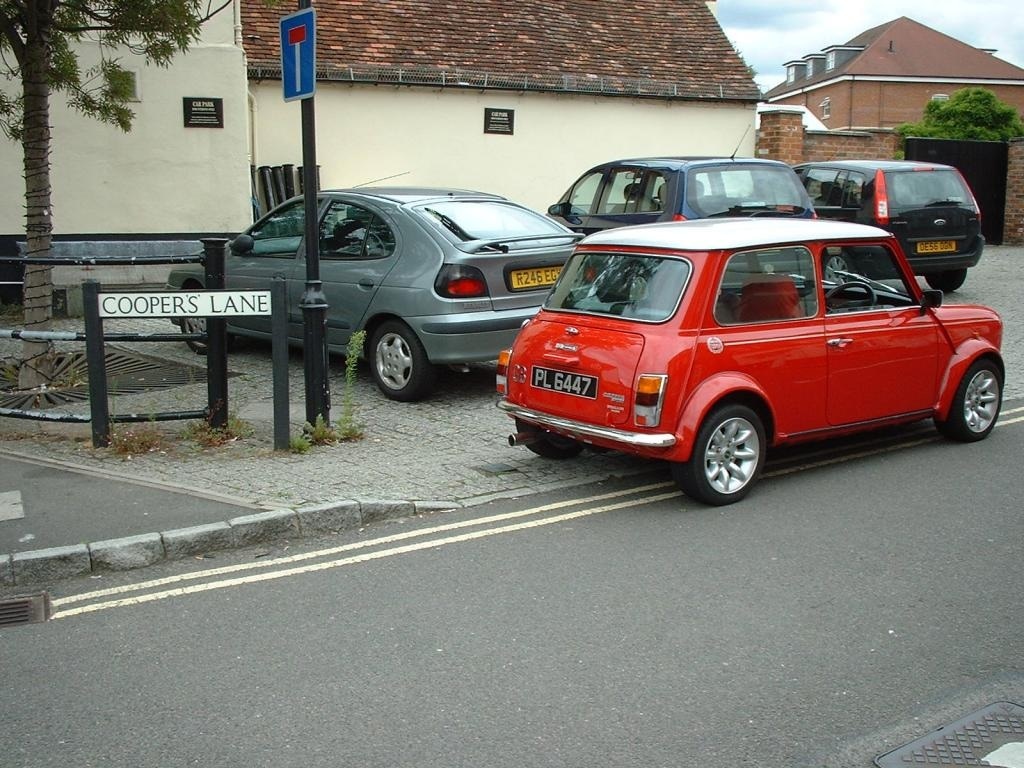 ​Being unregistered was not a viable option because it really was too difficult to register when I needed to subsequently register it and in any case, it wasn’t the sort of thing that a car buyer was really capable of doing without the aid of a grown-up to help them.  The other options/requests were sort-of reasonable but alas, a discount was NOT reasonable.  In fact, she told me, that I was lucky they were being so accommodating because these cars were already flying off the shelves and I should snap up what was on offer!  (Hmmm, I do hope this pure horse manure would come back to haunt her late the next year...).  So I told her to speak to the Sales Manager no less and ask him what he could offer as a discount for cash.

Some five minutes later, back she came, telling me that the list price was the list price and that was the price I would pay!  And in any case, he had reliably informed her that they only made £36 per car on the sale.  So I walked out to the words ‘…you’ve just talked yourself out of a cash sale…’ ringing in her ears and voted with my feet.

I tried the same with another soon-to-be-former Rover garage in nearby Witney.  Pretty well the same response.  Mind you another soon-to-be-former Rover garage in Reading seemed to be a little more agreeable after being offered the same conditions.  After some scribbling numbers and discount codes and figures and other hieroglyphics on his scribble pad, the salesman came back, rubbing his chin and suggested that he could do me a good deal. I waited with baited breath, breathed in, eyes open like soup plates, hands on the cash.  He suggested that for a cash deal he would throw in a set of mats and a full tank of petrol.  Dear o’ deary me.  My response this time was to tell him that he really needed to get out a bit more.

So, living at Abingdon near to the Rover HQ at Cowley I phoned and spoke to the sales desk.  I asked for the name of a Rover agent in Belgium, Holland or Germany (I can speak German so life on the continent is simple).  She did ask why, and I told her.  She assured me that there were many good deals on and I should try a tad harder to find what I wanted.  Nope, I decided to vote with my wallet and my feet.  Half an hour later I was on the phone to a garage in Brugges, speaking to Marijka.  Could she speak English or German, I asked.  I needn’t have bothered because she spoke both!

Within half an hour I had ordered and paid a 20% deposit on a brand new red, right hand drive, UK spec with European extras Mini Cooper Classic for the tax-free sum of £6,600 (UK tax of £1,100 to be paid on first registration don’t forget).  The European extras consisted of the high level brake light, fire extinguisher, first aid kit and warning triangle, hi-vis jacket, free, gratis… But, there’s always a ‘but’: This 'but' was that because it was a right hooker, Rover made them wait… and would I mind waiting?  Nope, wouldn’t mind at all!

So in late November I travelled to Brugges, meet Marijka and picked up my new car.  There it was - or was it?  There sat in the showroom was a brand new red Rover Mini.  But not the Classic Cooper that I ordered and paid for.  Nope, this was a brand new silver-roofed Rover Cooper Sport, the deluxe of deluxe.  Fearing that I was going to be stung for an extra grand or so, I mentioned this to Marijka.  No, this is what they delivered, this is what I had paid for and this is what I was having.  This was mine!  Not only that, there was a full tank of petrol (remember the garage in Reading?) and a box of delicious Belgian chocolates on the seat and a bottle of red wine.  Now that’s how to do business.  Within an hour of the formalities and a trip to the bank I was on my way back home.

The car was wearing UK trade plates so I presented the documents at the Dover customs, expecting to be charged VAT and duty.  There was none. The man came out, admired it and explained that any obligation for duty or VAT would be paid on first registration.  Alas, the garage at Abingdon told me that registration was not a task to be undertaken lightly by a member of the public without the specialised almost mysterious masonic knowledge entrusted to car dealers.  I explained to the man that I had no intention of registering the car for many months, certainly until the spring. Unperturbed he replied, ‘…that’s when you pay the tax then, it’s as simple as that!’   The customs man also told me something else too.  He said that if the car had less than (I think it was) 600 miles on it at first taxation, it would be registered as new as opposed to imported or any of the other registration V5 variables.  Thanks Mr Collins!

In the garage over the next few months I totally stripped the car to a rolling trim-less shell with engine, jacked it up three feet from the ground then set about it!  At the time Army vehicles were being sent down to 'the Gulf’ as deck cargo and a protective layer of oily grease was being tested to see whether this could stand the ravages of the salt-laden journey.  One product came out above the others and so, without putting too fine a point on it, I obtained a quantity of this stuff and had it decanted into pressurised aerosol cans.  Then, with the aid of assorted lengths of injector ‘straws’, some three feet long, I set about injecting every cavity, box section, seam, nook and cranny with this stuff, working from and into every angle and direction.

This stuff vaporises and the vapour got into every space.  It is moisture repellent and good capillary action.  What not to like about this stuff I ask?   It will seep between the spot welded joints.  To be honest, it’s a good job that I had the car jacked up over sheets of cardboard because the SuperTrol 001 was running everywhere.  Not an opening was missed.  But it was during this process that I re-discovered the dire reputation that BMC, BL and Rover, were infamous for.  Build quality was… I cannot think of words to describe it.  As an engineer it was cringe worthy.  The boot lid had been painted assembled to the car.  So beneath the fibre water absorbent hinge gaskets was bare unpainted white steel.  So you have to paint the car properly before you can start protecting it.  It’s mind boggling!  Paint under the car was non-existent.  I could go on, and on, and on...

Brakes drained, flushed with silicon fluid, drained again and filled with silicon brake fluid.  Coolant totally flushed and filled with Evans waterless 180 degree boil fluid - trouble-free with both.  Inside there were plenty of dated stickers dating the build to after July 2000 and inside the boot, a wired-on label from the Cowley export preparation bay detailing the extra fittings required.

Registering it the next year with the PL number that I’d retained from my last car was as simple as you like.  Just give the girl at the old LVLO in Oxford the papers, she had a crib sheet which she ticked off and casually asked me without an inspection how many miles it had on the clock.  And that was it, registered as brand new at first registration.  No import, no other classification just new at first registration.   A letter arrived from the Customs and Excise demanding the duty and dreaded VAT amounting to £1,100, making the total cost for a brand new UK-spec Rover Cooper Sport Mini, to European fitment standards £7,700.

​So what’s it been like since?  I admit to only taxing it and using it for the summer six months and even then, not when it’s raining!  What have I done then?  Not a lot really.  I replaced the wiper arms with chrome, removed the two inner spot lamps, removed the rear fog light and bracket, (using these holes to flood the rear sill quarter sections).  The rear boot badge had started to move in the heat(?) so I replaced that with a Mk.3-type MINI COOPER S badge but nothing else has changed.  The still new original parts are safely tucked away.  The rear high level brake light wasn’t working at the Brugges PDI stage and it was going to take a few weeks to get a replacement, so I told them to just take it out on the basis that if it ain’t got one, it don’t have to work!  This came back to haunt me ten years later when the brake light fuse blew once or twice a year.  The live feed to the high brake light had been snipped off and was just shorting.  An easy fix – when I’d discovered what was happening.  The horn failed due to a dodgy terminal on the cassette…  But apart from that, nothing.  Oh yes, I nearly forgot - the rear left-hand hub seemed very tight during its strip down and this was due to the hub nut being too tight. I mean, just how did Rover get away with this stuff?

And now?   Just been out in it for a nice run to Southsea and it’s singing like a little bird.  Do I love it to bits? Yes.  Does it still bring a smile to my face? Yes.  Is it still rust free?  Totally.  I have kept a small book that I’ve detailed its history with me.  You know, the little jobs, reminders and other odds and sods.

Remember when the dopey bird at the garage in Abingdon told me that ‘…I was lucky they were being so accommodating because these cars were already flying off the shelves and I should snap up what was on offer'.  Let’s put that farce into perspective.  A year later our local paper, the Oxford Mail, showed an aerial photo of the old Upper Heyford air base being used as a store facility for unsold Rover cars.  And there, with fresh wet grass growing up to the top of the sills and presumably underneath and all round, were hundreds of unsold Minis including the instantly recognisable silver-roofed Cooper Sports and presumably 500s too.  You could still buy them 18 months later...
© 2015 The Last Minis | Contact | Privacy | Sitemap