Engine development engineers, led by Mike Theaker, began working on refreshing the Mini's A+ series engine to beat stricter upcoming emissions legislation. Theaker, who had devised the Mk.6 Mini's single-point injection system in 1991, suggested making the switch to a more advanced twin-point system - an idea that, at first, was anything but well-received. Many simply said it couldn't be done. But Theaker, a Mini fan himself, was adamant that it was possible. In his mind, it was the only viable solution for keeping the Mini alive. Despite Rover's senior management being dead set against his proposal, Theaker spent hours working on detailed calculations in his spare time to determine whether or not it could be done. Eventually, he decided to modify an earlier SPi prototype Mini, swapping the fuel injection system for an experimental version of his proposed design.

After countless hours of unpaid work and thousands of calculations and diagrams, the end result was one of the most complex multi-point injection (MPi) systems ever designed. The principal issue with installing this kind of system to an A-series-derived engine was the cylinder head. The Mini has 'siamesed' inlet ports, whereby one inlet port feeds two cylinders, each one needing fuel at different points in the engine's cycle. To combat this, Theaker and his team utilised a completely new principle which they named 'bi-directional pulsewidth stretching', which involved firing two pulses of fuel back-to-back into the inlet port, varying in size and direction depending on engine conditions. All of this happened during 1992, and it wasn't until BMW took over the company that Theaker's creation ever truly saw the light of day. With Pischetsrieder's aim of extending the Mini's production life by a further four years, Theaker's system was roped in to slash emissions and boost fuel economy. To control all this stretching of pulses, the company's top-of-the-range MEMS 2J ECU (previously used on the Rover 800 KV6 and 1.8 VVC K-series engines) was fitted to the newly-updated A-series. As Autocar's Colin Goodwin put it, "fitting [this ECU] in a Mini is like asking Albert Einstein to keep the score in a darts match".

Speaking in the September 2000 edition of Mini World, Theaker explained how his work on the new system did eventually become public:

"I revealed the prototype to my Chief Engineer in 1991. He was suitably impressed and a patent was applied for by Rover in my name during 1992 and was granted for 1995. There were problems with the prototype but the potential was clear. Nothing really happened on the MPi until 1994 when BMW took over. John Cooper had driven an early prototype and, at the Motor Show that year, he asked Rover's Engineering Director, Silvert Hiljemark, why we weren't going ahead with development. Mini would have had to cease production at the end of 1996, due to non-compliance with the ECD2 regulations, but BMW were now keen to keep it going until 2000 when the new Mini was scheduled to start production. The combination of BMW's will and John Cooper's insistence meant that the climate was right and 'productionisation' of the system took place."

Perhaps the most noticeable and radical alteration under the bonnet, though, was the repositioning of the radiator from the right-hand side of the engine bay - previously a trademark Mini design feature - to the front. This was necessary for the Mini to comply with new EU pass-by noise legislation, but it also made for a quieter cabin. To further cut cabin noise, Rover laid down far more sound deadening material than in previous iterations of the Mini, bringing a welcome slice of refinement and comfort.

Although the venerable four-speed 'box remained in situ, even it couldn't escape the hands of Rover's engineers. Gone was the 3.2 final drive ratio of the previous model, in came a far higher ratio of 2.76. In essence, this meant each of the four speeds was taller: fourth was now a cruising gear, and top speed could be achieved in third. Ordinarily, a final drive ratio this high would have blunted acceleration enormously. But, thanks to the increased torque on offer from the new twin-point injection system, the Mini's acceleration remained relatively intact. OK, it wasn't quite as spritely as the previous generation Mini, but that was a small price to pay for what was now a far more refined and complete package.

On paper, the modifications to the radiator and final drive meant the halving of external noise from 77dB to 74dB - enabling it to easily pass those pesky EU regs. In practice, the sweeping alterations detailed above made motorway cruising a much more palatable experience than in Minis of old, and added yet another facet to the Mini's already multi-faceted character. 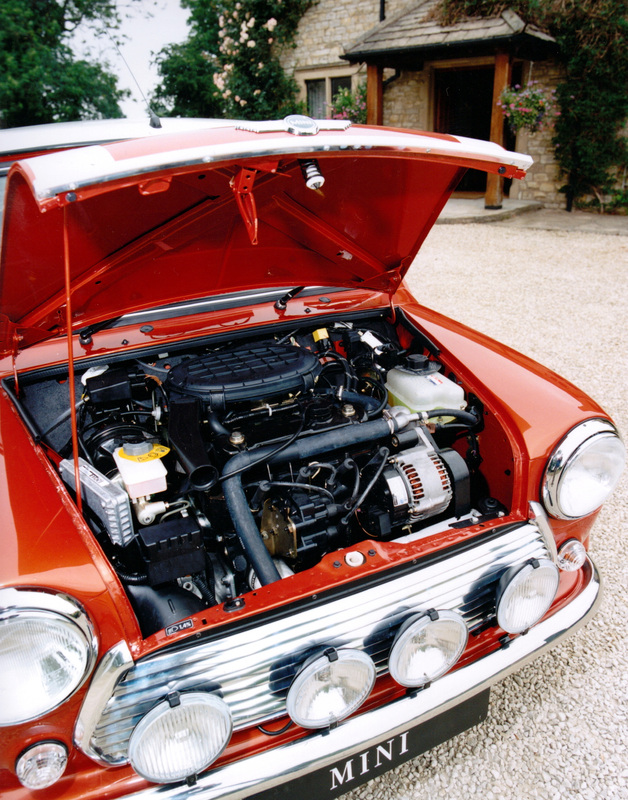 It wasn't only the engine and gearbox which needed serious development for the Mini to remain in production. The car's safety - or lack thereof - now placed it under threat from looming ECD2 regulations. Being a late '50s design, it's fair to say that, by the middle of the 90s, it was lagging behind a little bit as far as safety was concerned. There was no doubt that the Mini was a tough little car, but that was precisely the problem. Come the final decade of the 20th century, virtually every new car incorporated crumple zones - now commonplace, and taken for granted amongst modern cars. The Mini, well... didn't. 'Crumple zones' were but a distant dream in the minds of only the most intelligent engineers when Issigonis first put pen to cigarette packet to design the Mini in 1957. Engineering one into the Mini would be completely impossible, at least without murdering its charming looks and pint-sized dimensions.

With crumple zones an impossibility, Rover's engineers would have to rely on fitting an airbag to boost the Mini's safety. Now, fitting an airbag to a forty year-old car is not as easy as it sounds (if it sounds easy at all). An awful lot of engineering is required to make sure the airbag doesn't wind up doing more harm to the hapless driver than good. To make matters worse, the Mini's bizarre driving position and the angle of the steering column made this a seemingly unworkable solution. In fact, a number of people within the company had already deemed it an 'impossible' task. But, against all the odds, Rover designers pulled off yet another previously 'impossible' feat with the 1997 Mini. At the time, few superminis or city cars even had an airbag on the options list. The Mini, though, had a driver's airbag as standard, mounted at the end of a collapsible steering column. But that wasn't the end of the safety measures. The Mk.7's doors were still as skinny as before, but now incorporated side-impact bars to help ward off any, er... side impacts. Completing the raft of safety upgrades was the addition of seatbelt pre-tensioners.