Although there were a vast number of changes under the skin of the new Mini, it was the visual alterations which truly made the Mk.7 stand out from its predecessors. While the basic shape and overall design - thankfully - went largely unchanged, there were a vast array of modifications and upgrades made, designed to make the new car both easier to live with and easier on the eye.

However, the first step towards designing the MPi Mini was rebranding. Lots of it. As we've touched on before, the sole reason for the existence of these final Minis was to prepare for the launch of the all-new MINI - to keep Issigonis' classic somewhat in the limelight until the Rover-designed successor hit the streets. Because of this, Rover management, headed by BMW boss Pischetsrieder, knew they needed to detach Mini from its parent company to form a standalone brand if they were to realise the MINI's full potential.
The second phase of rebranding was to rethink the model line up. The decision was made to take the range back-to-basics and offer both Mini and Mini Cooper models for the same price, eliminating the gap in performance and engine power entirely. With no 'entry level' model, the identity and selling points of each variant would now have to depend solely on their aesthetics, meaning the Mk.7's designers needed not only to enhance the image of the Mini overall, but differentiate each model significantly enough to appeal to different kinds of buyers.

The Mini 1.3i was positioned as the 'luxury' model. Even though it was no more 'luxurious' than the Cooper with which it shared its price tag, the choice of trim and exterior differences - such as the 'pepperpot' wheels and Balmoral seat trim - marked it out as the more refined and elegant of the pair. As you'd expect, the Cooper continued to hold its title as the Mini's sports model. Although there were no longer any differences in performance between the two, Minilite-style wheels, twin spotlights and a drilled alloy accelerator pedal were all standard fit on the Cooper, setting it apart from its more subtle and sophisticated sibling.

It might have seemed insignificant at the time, but in hindsight its clear to see that positioning the Mini as its own brand formed a key part of BMW's strategy for the future. Judging by the immense success MINI has today under BMW ownership, this strategy was undoubtedly a successful one.

Rebranding alone wouldn't be enough to give the Mini its attitude back though. For that, some serious design work was required, which came in the form of the Sports Option Pack, by far the most notable addition - aesthetically - to the Mk.7 Minis. As the name suggests, this was an optional extra available on both the Mini and Mini Cooper, and was pitched to customers as "The ultimate in street style". For £800, this desirable package added twin fog lights (and twin spotlights on the non-Cooper version which were standard on the Cooper),
Now, although the Sports Pack - somewhat ironically - had a negative effect on the car's acceleration and performance (as a result of the increased aerodynamic drag produced by the considerably wider wheels and wheel arch extensions), this was not enough to deter a large percentage of buyers from opting for this pricey collection of extras. For many, the striking appearance of the Sports Pack made it a must-have add-on.

Joining the Sports Pack on the options list were - quite literally - hundreds of new colours, trims and accessories, making the Mk.7 Mini a true pioneer of personalisation. Never had any car before incorporated such a vast range of optional extras, allowing customers to create the Mini they'd always dreamed of owning. There were Retro colours, ultra-modern pearlescent shades and traditional solid colours; chrome exterior packs, wood interior packs; Union Jack decals, 1960s-style badges, leather this and leather that. The sheer number of possible combinations of trim and accessories was unheard of in the automotive world, and set the precedent for countless other car companies attempting to offer a similar level of personalisation. Most importantly, though, the Mk.7's accessories programme laid the foundations which the new MINI would build upon four years later.

Mini owners were also encouraged to grab some Mini-branded merchandise and accessorise for themselves. Whether it was branded razors, pens, model cars or clothing, the Mini Merchandise catalogue had it covered. As with the range of vehicle accessories, the choice and variety of merchandise on offer was truly unparalleled, and gave customers the chance to bring a slice of the Mini 'lifestyle' with them, wherever they were.

It wasn't only the level of personalisation which was a first for the Mini; the level of refinement and luxury on display on the inside broke new ground, too. Half-leather seats (which were, incidentally, a new, more practical design) were standard on both models, as were leather gearknobs and steering wheels. Talking of steering wheels, the 3-spoker in the 1997 Mini was identical to that of the MGF - Rover Group's flagship sports model - and neatly incorporated that airbag. As with the gearknob and handbrake grip, the stylish new wheel was offered in the same array of colours as the seats, allowing for even greater customisation potential.

"Safer, more civilised, but still a bundle of madcap fun"

Rover's archetypal walnut dashboard was carried over from late Mk.6 Minis, but timeless new magnolia gauges added the perfect finishing touch. Something perhaps a little less glamorous was the Mk.7's upgraded heater system. Still no air-conditioning (except for the Japanese market), but there was now two heater speeds to play with. Two! That's precisely one hundred per cent more than in the Mk.6. Forget the MPi system or the airbag - that's what I call pushing the boundaries of engineering.
This may have been the Mini's final evolution, but it surely was one of its best. 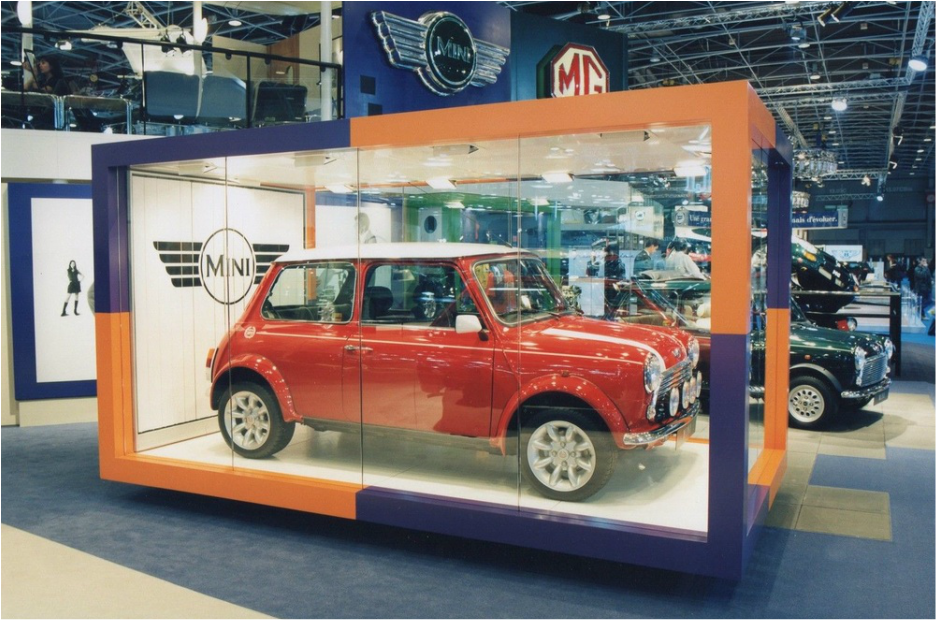