FASHION & DESIRABILITY
Motorsport wasn't the only area in which the Mini experienced a resurgence towards the tale end of the 20th century. Through inspired ad placements and an unforeseen marketing offensive, the desirability of the car rocketed and it became, arguably, even more of a fashion accessory than it was back in the 1960s.

Of course, this was no accident. Just a brief scan through of Rover's October 1997 press release for the Mk.7 was enough to make clear the company's objectives with the new car. Under the prominent heading, 'Following Fashion', phrases such as 'self expression' and 'evocative of the 1960s' are commonplace, and emphasise how central fashion and desirability were to the design process of the '97 twin-point models.

As if to prove this point, Rover brought along two unique, one-off design concepts to the 1997 Frankfurt Motor Show, each representing entirely different ends of the Mini-modifying spectrum. The Mini Hot Rod was, essentially, the ultimate road racer: 160hp from a 16-valve A-series motor, Team Dynamics 13" wheels, dogbox and a stripped out interior. The Mini Limo, on the other hand, offered supreme luxury, with electric, sliding, leather-backed, heated-everything and a (state-of-the-art at the time) satellite navigation system. Watch Mr Clarkson take a look at both at the later British Motor show below.
With the launch of the MPi Minis came a sense that this national treasure of a car was finally under the control of a company which understood it; a company which recognised its strengths and the core reasons for its widespread, unrelenting appeal. This 'epiphany' of sorts was quite clearly reflected in Rover's marketing and advertising for the Mini, with the late '90s seeing the launch of several well-timed and carefully considered tie-ins and promotions.
noticeable effects of Rover's own marketing push.
In 1998, the Mk.7 Mini even made it to the big screen, starring alongside an A-list cast in The Avengers. In the film, British agents John Steed (Ralph Fiennes) and Emma Peel (Uma Thurman) attempt to 'save the world' from mad scientist Sir August de Wynter's (Sean Connery) potentially-lethal weather machine.

Rover supplied six of the latest MPi Minis to Warner Bros. for filming, only four of which survived. In a dramatic chase scene, de Wynter's henchmen chase down John Steed and Emma Peel in their Jaguar E-type, using remote-controlled mechanical bees to attack them in the process. Predictably, things don't end well for the baddies in the Mini, who leave the road and launch into the countryside, sending the poor Mini catapulting through the air.

After filming was complete, Rover handed the four remaining cars over to the Heritage Motor Centre, where they were used as part of an education programme designed to promote safe driving. When the programme had run its course in 2005, legendary stunt driver Russ Swift snapped up all four cars, using them as part of his world famous stunt displays. 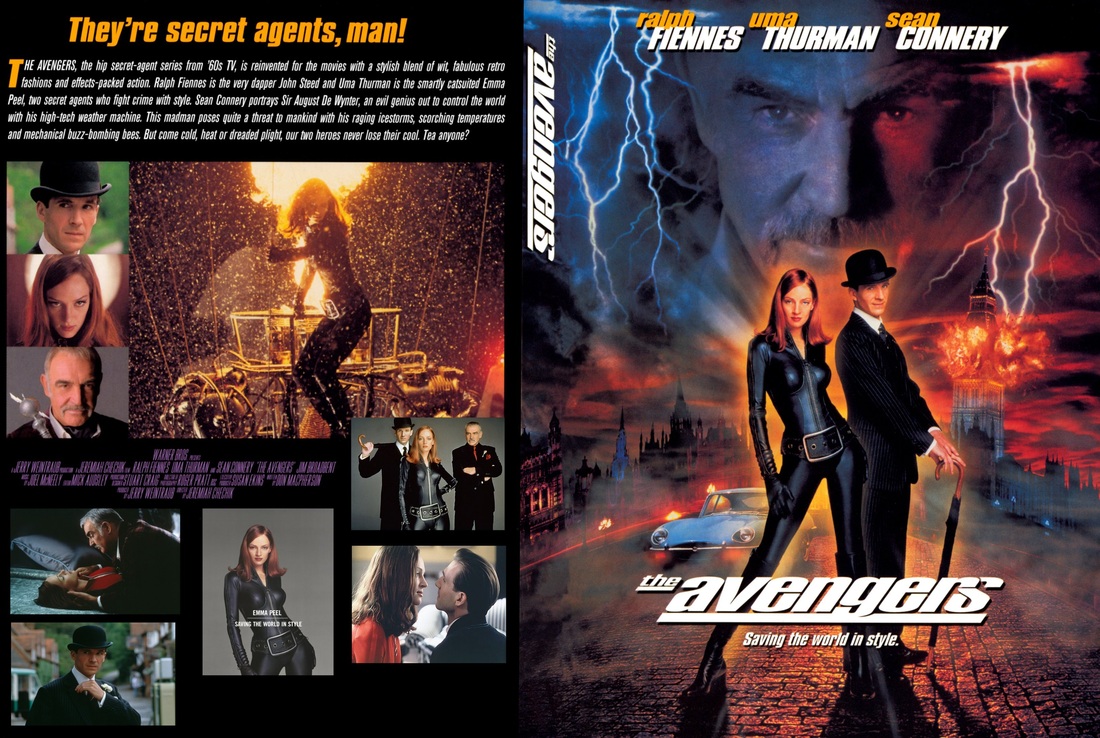 Somewhat less conspicuous than all of that, though, was the April Fools letter which Rover sent out to owners in 1999, informing them of an approved 'dress code' for Mini dealerships. Following on from the car's recognition as a British design classic by The Design Museum the previous month, Rover's marketing agency Craik Jones capitalised on this, understanding the importance of humour in re-popularising the Mini. Speaking in 1999, Lisa Tobisch of Craik Jones explained, "It ties into what the Mini is all about... it's that sense of fun, irreverence". 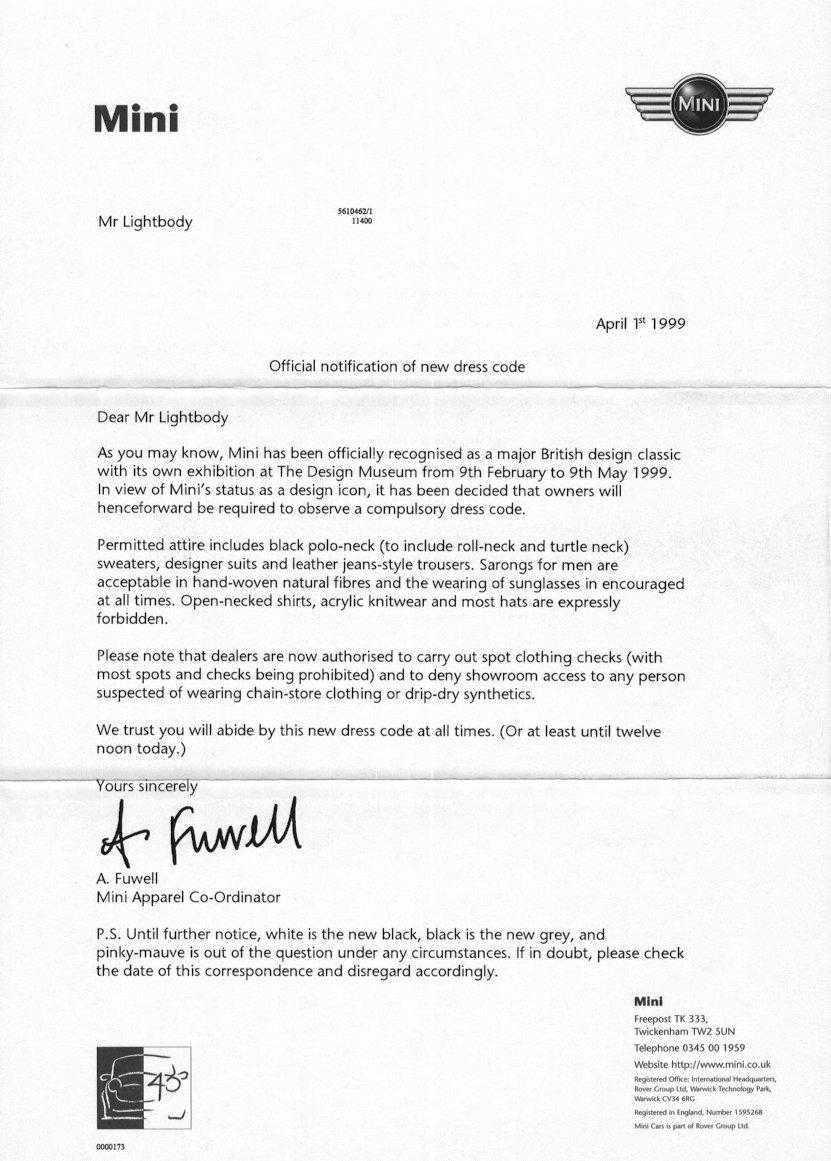 The full April Fools letter. Image courtesy of Rob Lightbody
With a car as clever and unique as the Mini, it stands to reason that its advertising should also be clever and unique. At least, that's what then-Mini Brand Manager Patrick Fleming believed.

In 1999, The Design Museum ran a Mini design competition, for which entrants had to come up with the most creative and innovative colour scheme possible. This contest would have generated considerable publicity for the Mini regardless, with over 1000 entries being made. To spice things up, however, Fleming and his team managed to convince David Bowie, Kate Moss and Paul Smith to join in with their own creations, resulting in enormous publicity for Mini - the likes of which would have ordinarily cost millions of pounds to generate through traditional means. Speaking to Gavin Conway during the Mini's 40th Anniversary celebrations in 1999, Fleming said, "It's all about establishing a dialogue with people who currently own Minis, but it's also about reaching those people who have moved on, but still might have a hankering for a Mini. Those are the sort of people who might consider the new car". 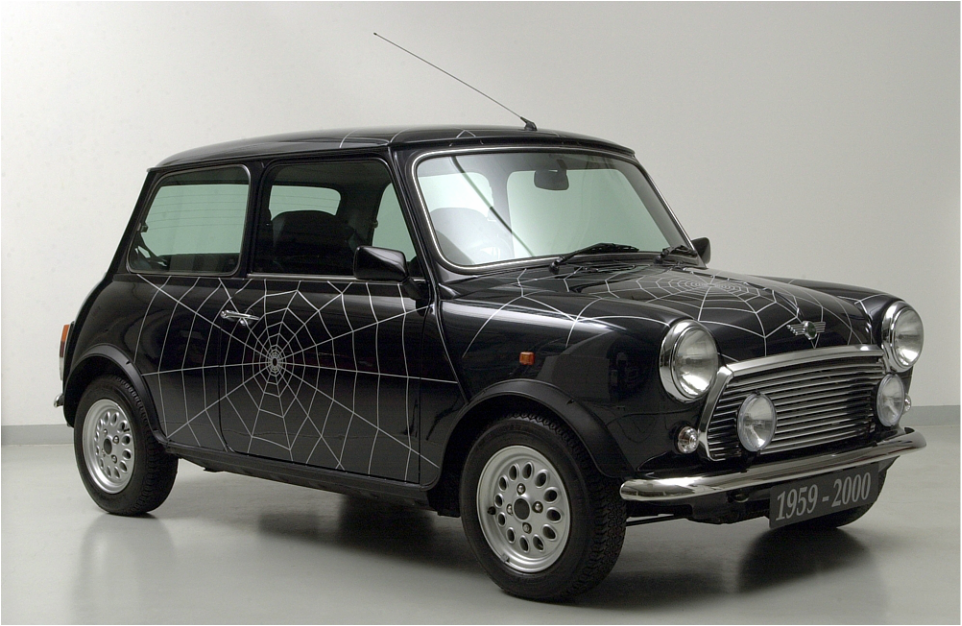 Kate Moss' entry into The Design Museum's competition
As if to top off four incredible years of success, in December 1999 the Car of the Century awards took place in Las Vegas. In a process which had taken three years to complete, 700 cars were shortlisted for the prize, all of which were determined to be highly influential, ground breaking and significant designs. In the end, the Mini was beaten to first place by the Model T Ford in the 'International' category, but secured second place ahead of the likes of the Citroen DS, Volkswagen Beetle and Porsche 911.  In the 'European' category, though, the Mini took first place: the perfect conclusion to a packed year of celebrations for the car's 40th anniversary.